My wife Allie had a 2nd affair that I discovered in March 2018. Since then, I have been on an emotional roller coaster.  Maybe better described as being in the middle of an emotional ocean with wave after wave of pain, confusion, discouragement, skepticism, isolation, doubt and heartbreak hitting me.

It is overwhelming and sometimes I feel like I am drowning in that pain. Most experts agree that it will take two years (or more) for the hurt spouse (me) to recover from my wife’s infidelity. That’s a lot of long-term pain. Then what? Will she do it again?  She already has had multiple affairs so the chances are pretty high that she will, in fact, cheat again.

When I first discovered the affair in March, I thought Allie was pretty hard to the idea that she just devastated me beyond any pain I had ever felt. I guessed that she was still in love with her affair partner Mark. I even speculated that she had a bit of a mental disorder. At first, I blamed myself for not being a good enough husband, etc. Normal self-doubting stuff for when your spouse of 18 years has another affair. During this time, I have questioned whether to stay to try to work it out or to leave her and get a divorce. 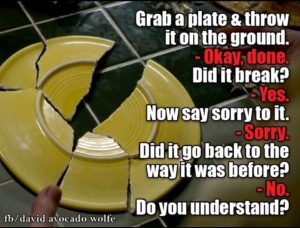 Fast forward to today. Allie says she is very remorseful. She often admits that she was wrong and that this was her issue and she is 100% to blame for it.

I feel that it is great that she’s coming to this place of repentance but I always feel that it is better to keep yourself out of a situation than have to repent later for it.

As adults, we do have absolute control over our decisions, our actions, our behaviors, and our choices. She consciously chose to have sex with this guy several times over the course of two months.

“But she’s apologizing. She can change.”

Is that true? Can she change? Is she able to be a different person? Or is our character so ingrained in us that we simply cannot change. We cannot be different….even if we want to?

Right now, if you took away the fact that she had another affair, our marriage would be great. She’s being honest, caring, loving, and responsive. Before, she wasn’t.  And while she was pulled away from me, she would blame me for pulling away from her. That blame added up. She then used the blame to justify being at the end of herself and saying “screw it” I am gonna go for it with Mark. Bad choice.

There are severe lifelong consequences for having an affair, especially one like hers. She fell in love with Mark. They started planning activities together. Probably did some future planning as well. And I can just hear her, throwing around the “love” word to see if she could get him to respond in kind.

I wasn’t there, so I don’t know exactly, but I know her. She looks for constant validation and affirmation.

So I don’t know what to do with her current remorse. It almost burns when she says sweet words. I hear the words, but they almost come into my heart as exactly opposite of what she’s saying.