Couldn’t sleep this morning. Woke up at 4:00 or so and just stared at the window in our bedroom. It was dark last night but there are some streetlights that illuminate our window blinds a bit. I just lie there thinking about how many slats were in the blinds. Could I count them? Would that help me sleep?

Allie moved closer to me and wrapped her arm around me. That may have helped in the past. But now, all I can think about is the nightmare of Allie sleeping with another man named Mark. On March 20th, 2018, I discovered Allie was having an affair with Mark. Since then, I have woken up almost every night at either 3:00 or 4:00 am. Sometimes I can go back to sleep. Sometimes I can’t.

Allie doesn’t like that I wake up and get up. She says it bothers her. Ok. But I am bothered that she’s had her second affair in six years. My problem is that I don’t come to decisions very quickly, especially when the decision is the hardest one I have ever made. Do I stay or do I go?

So last night I woke up. And pondered. What does staying look like? What does divorce look like? Do I want to get divorced? Can I ever trust Allie again? Will I be able to get past the visions in my head of the two of them having sex?

Allie woke up too. Then she starts talking. (always a bad choice at 4:00 am) It isn’t long until we’re arguing about some semantics.  Yesterday she described the affair as a “relationship.” While I agree that it was a relationship, my mind says that you don’t get to have sexual relationships and love relationships with other men unless you’re divorced or single. Once that is the case, then you have relationships. Until then, they’re affairs. And affairs aren’t relationships. They’re fantasy escapes for cowards.

An affair is a sexual relationship, romantic friendship, or passionate attachment between two people without the attached person’s significant other knowing.

Since Allie had all of those things — sexual relationship, romantic friendship and passionate attachment — without me knowing, that is an affair.

Okay. Point made. But she was arguing that the word relationship didn’t matter. It really doesn’t but she gets pretty defensive and will rail on me until I get her point and her side.

I didn’t argue back at all.  Just said that the use of the word had bugged me. Then Allie proceeds to tell me about context and how I assume things, etc. Remember, I only said that the use bothered me.  I didn’t verbalize any further assumptions.

As she argued, I was reminded that this is precisely why I want to divorce. I can 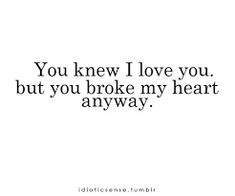 apologize, I can be kind, I can give grace, I can try to calmly express my feeling(s) and she goes to effing town on me.

When she took a break, I finally said that this is one of the big things I have to see change in her before I make a decision to commit fully to this marriage.  I have to be able to express my feelings and be safe in that. If I can’t, then I will leave.

She said “if you want to leave, then go for it. I don’t want you to and it will suck, but just do it and get it over with.”