If you’ve read this blog, you know that on March 20th, 2018 I caught my wife in her second affair. edit: (Actually I found out about a third affair after writing this.)

Aside: If you’re cheating on your spouse right now or thinking of cheating on your spouse, HEAR ME NOW:  Cheating has life-long consequences. The choice you’re making that may last a few weeks or months will destroy lives. Your family, your children and the families and children of generations to come. The damage you do to your kids and the kids of the other family WILL be felt throughout the community at large. THIS IS NOT JUST ABOUT YOU.  IT IS FUCKING SELFISH AND SELF-CENTERED TO THINK THAT IT IS ANY DIFFERENT.

That being said, let me tell you where we are in our story.  My wife Allie had a two month long affair with a married man. He has four children and he and his wife would have been celebrating 20 years of marriage in August of this year. He is one year older than Allie at 43. Allie and I “celebrated” our 18th anniversary in March. Fortunately for me, she and Mark had “broken up” so that she could go on a trip with me to Park City UT. They got back together as soon as she returned to Idaho, but at least they weren’t together while we were on our anniversary. Note the sarcasm.

When I found out about the affair on the 20th – just 16 days after our anniversary – I asked Mark if I should tell his wife. As a matter of fact, I have screenshots of the text exchange.

My texts are in Green.  Remember, I know Mark so the affair texts start at “Should I tell your wife or should you?” 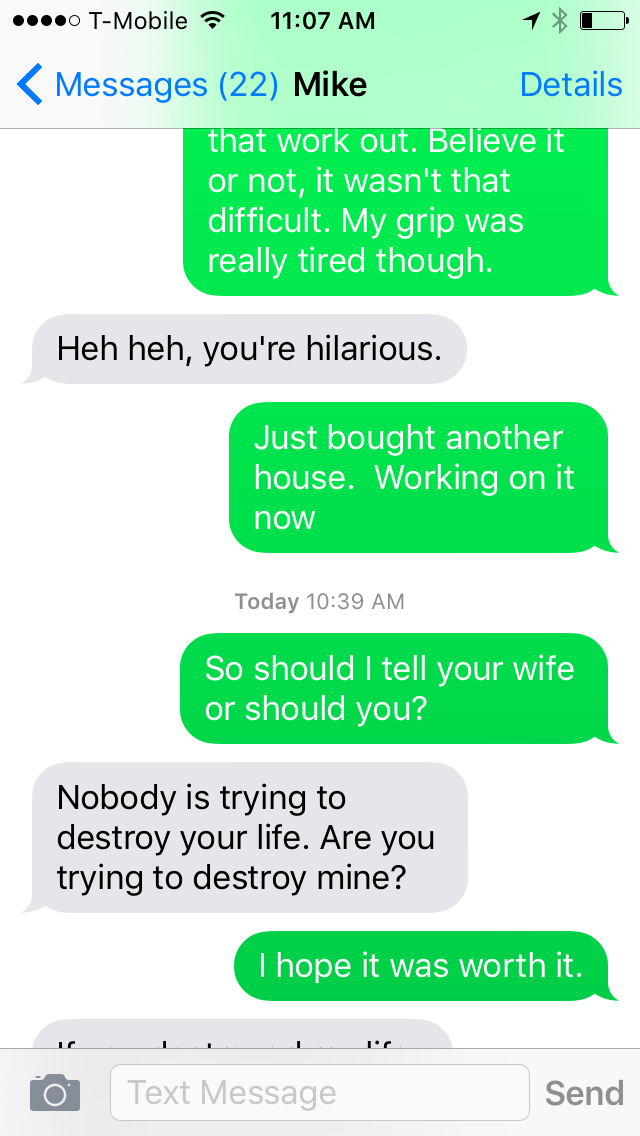 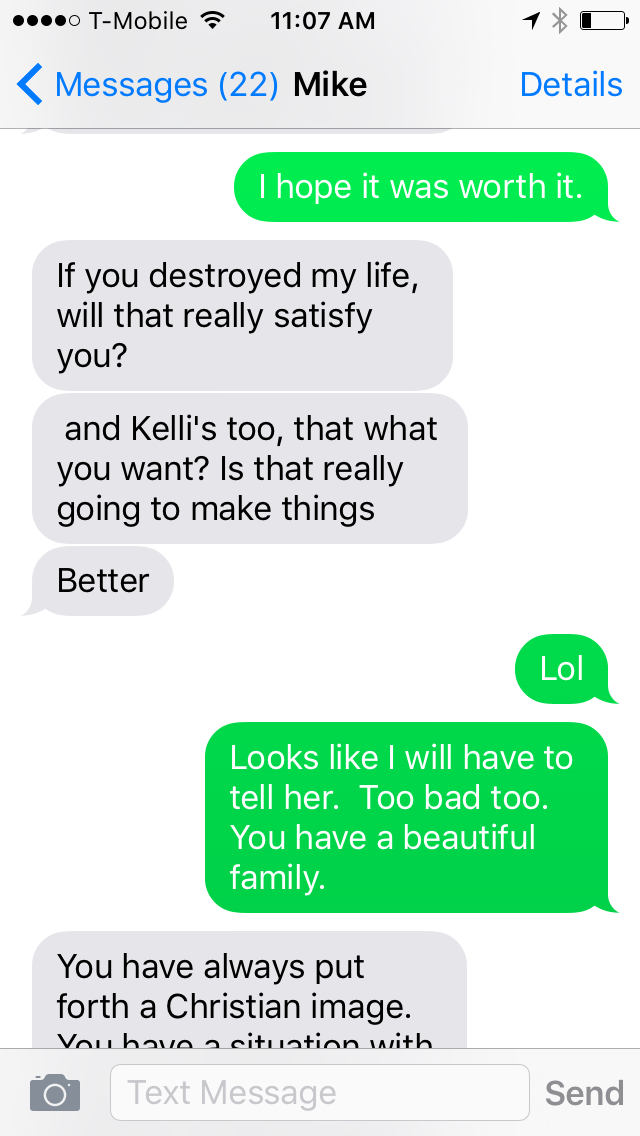 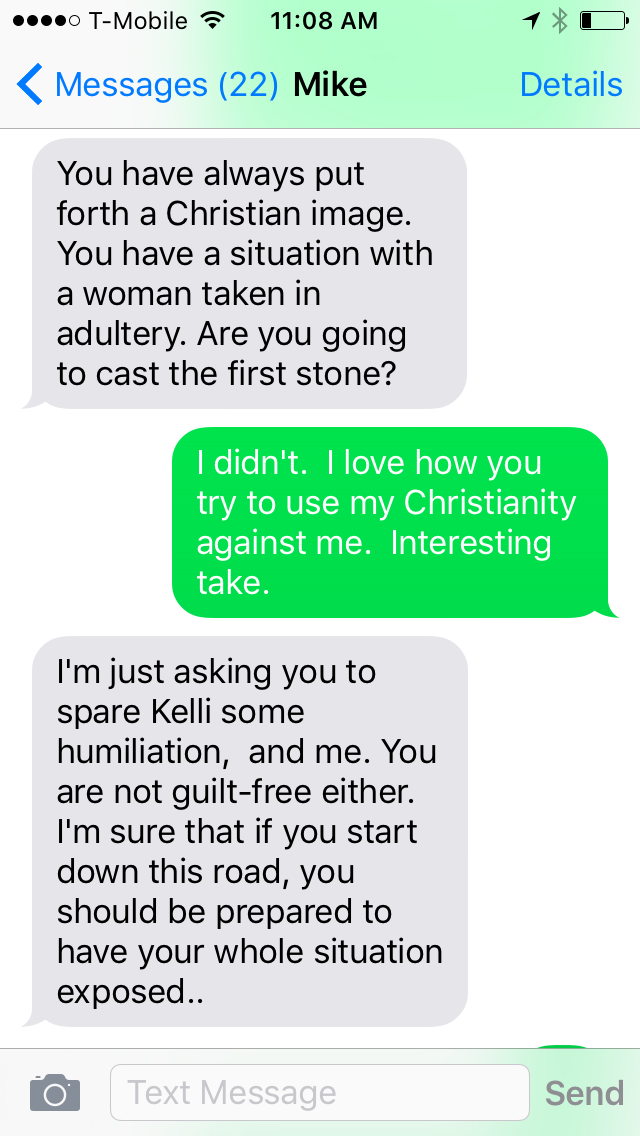 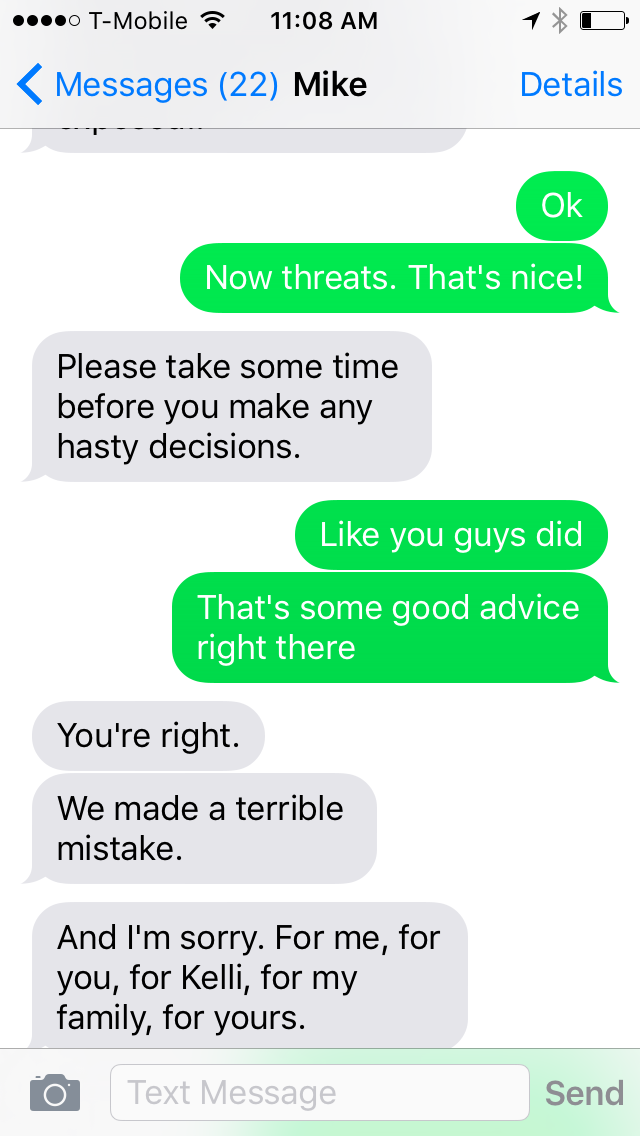 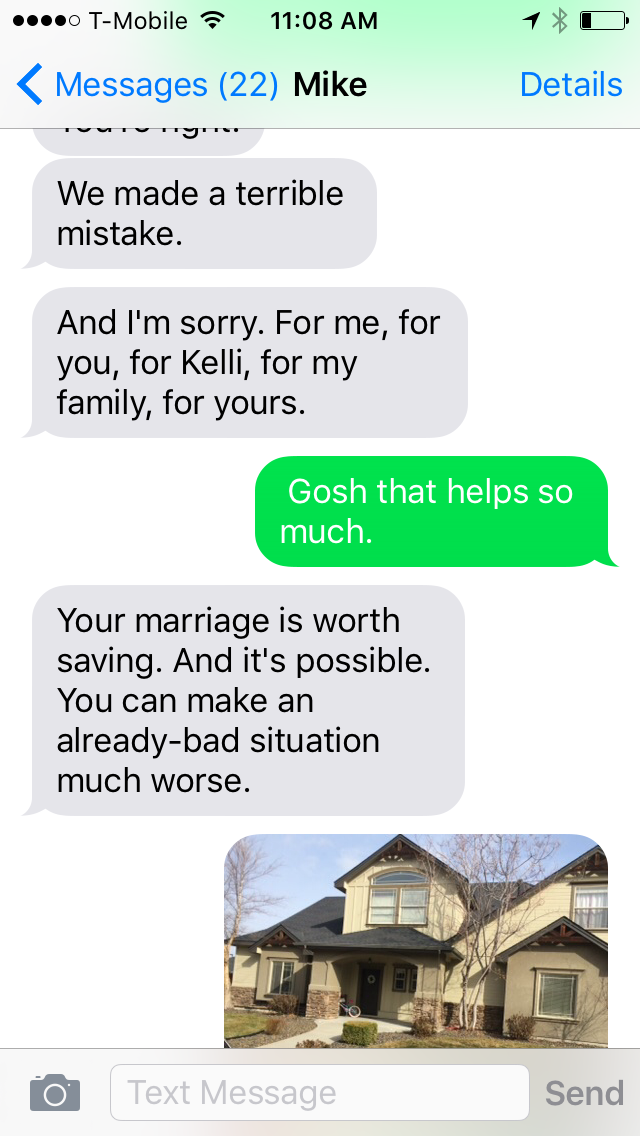 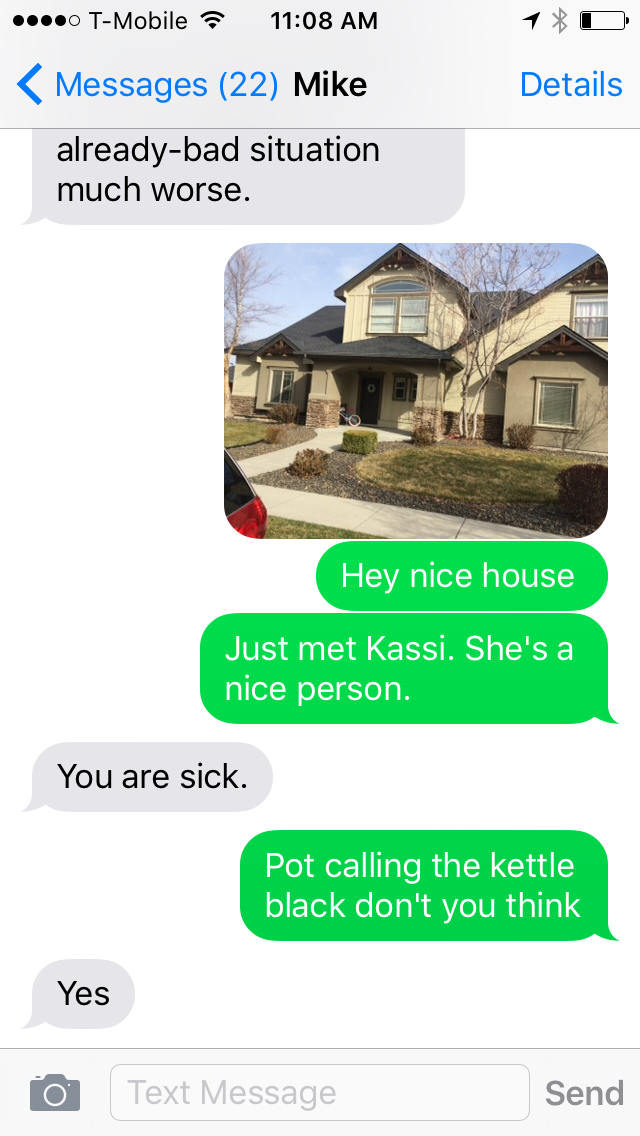 I found out that on May 1st, Carrie filed for divorce from Mark. Now, I know what some of you might be thinking. “Good. He deserves it. Effing Bastard.”  Wait, that’s what I was thinking. LOL. Really though, this divorce filing has hit me pretty hard the last couple of days. Why? Well because everything I say about him is true of my own wife. If I say, “cheater deserves what he gets” then that is also true of Allie isn’t it? If someone says, “the affair was just the culmination of other, more serious issues in the relationship” then doesn’t our relationship have those issues too?

You see on March 19th, I thought we were doing pretty well. This affair surprised me.

It also bothers me that they’re getting divorced because frankly I am a bit jealous. Since d-day, I have asked Allie no less than five times to divorce. She has refused. Instead, she says she is remorseful and keeps thinking that our marriage will last. 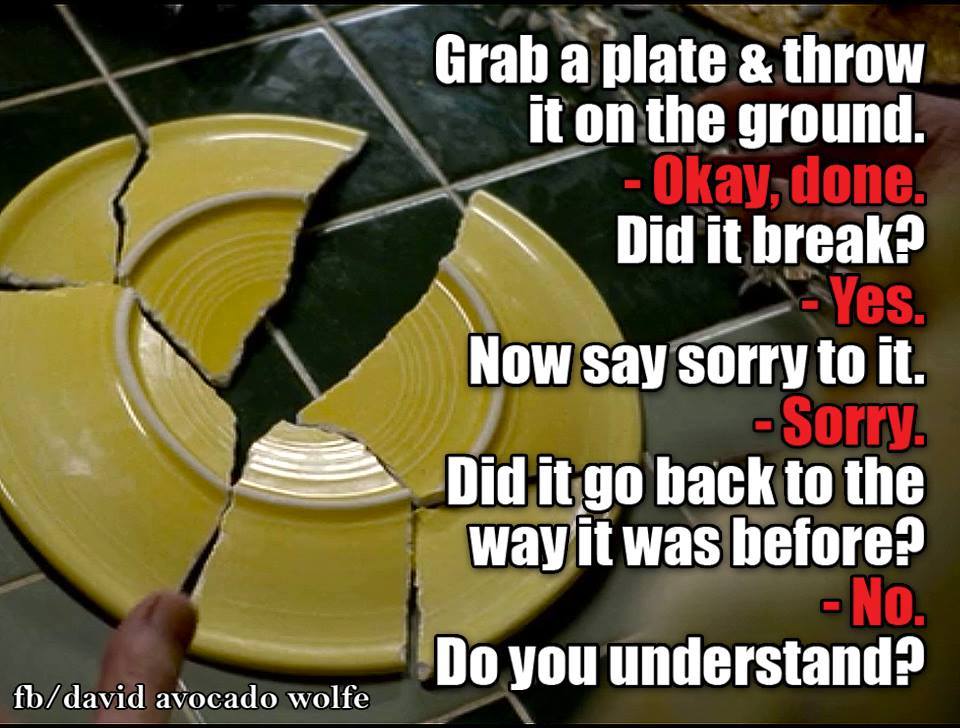 You see, no amount of sorry can make the plate the way it was before.  Just won’t happen. The plate can be repaired but it will be easy to see the brokenness and it may not function as a plate any longer. Even if it does serve as a plate, it may not be one you’d be proud to use at Christmas dinner. Most likely, you would throw the plate away after destroying it. This is what happens with affairs!  People throw away years and years of history. They purposely destroy the lives of others for their own selfish gain.

The last reason that I am bothered by the divorce of Carrie and Mark is that my wife played a HUGE role in the breakup. She is the homewrecker “other woman.”  Allie said to me today that she’s dealing with a lot of sadness for breaking up a family. (Mark’s)  But what about our family? Yes, I am married to the “other woman” who, to this day, will ask me for compassion on her situation. Her situation? What was it exactly? She has the most devoted husband on the planet, three beautiful children, a great life, a great career, and pretty much everything she ever wanted. What is “her situation?”

If you’re reading this and have gotten this far you might be wondering, “why the eff are you still with her?”  Great question. Today, I would leave. Tonight I might stay. It’s as simple as this. Emotions in this suck worse than anything imaginable. They are a flip-flop roller coaster with no end in sight.