Narcissists enter into relationships in an attempt to fill this void and to make sure that they have someone who is always available for sex, an ego stroke or whatever need they may have. 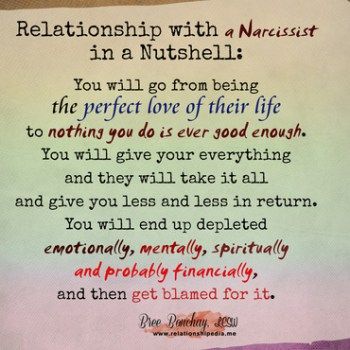 Read this article.  It sums up a narcissist and how Mark was able to convince my wife, Allie, to have an affair with him.  He literally swept her off her feet with adoration.

Once a target has been chosen, it’s almost like the Narcissist gets tunnel vision. They are hyper-vigilant in their pursuit and will project the perfect image that their victim wants them to be. They are excessively caring, loving and attentive at this stage. They shower their targets with attention, compliments and literally sweep them off their feet.

They place their target on a pedestal, idolize and worship them. Their target is the greatest thing since sliced bread. Here the Narcissist is ecstatic, full of hopes and dreams. They will talk and think about them constantly, they are euphoric. This is as close as a Narcissist will ever get to feeling love. This kind of idolization is what others would call infatuation.

The victim is likely so caught up in all the attention and is usually thinking at this point, that they have found their soul-mate. Their pursuer is exactly what they want in a partner (because the Narcissist is mirroring what they have learned appeals to their target)

Each time Allie has journaled about the affair in the process of our counseling, she has described Mark exactly as this article describes him. He showered her with attention, affection and made massive efforts towards her. She was his target. His victim.

Many targets are left asking themselves, “Did he ever love me? Did I mean anything to him?” The simple answer is no. No one means anything to him. Women are only a means to an end – to obtain the much needed Narcissistic Supply.

What must be remembered is that you were deliberately targeted, lied to and manipulated by a skilled con-artist, for their own gain.

Allie fell for this con completely. Hook, line and sinker. She was completely caught up in the rush of this man risking everything for her. That he would give up his family, his life, his all to be with my wife was so attractive to Allie (who may be a bit narcissistic herself if I am honest)

Already he has assessed his target, and he is now mirroring her, so he is reflecting back to her exactly what she wants to hear. But he wants control over her. He wouldn’t have her full attention or control, if she were busy doing other things.

What Mark didn’t expect was that his wife of 20 years would file for divorce. He kept telling Allie that Carrie would forgive him. That all he needed to do was confess it and apologize and their marriage would be fine.

This is mind control. The message that you receive is:

At the idealization stage the narcissist is not only generous in extending a compliment, he’s also gracious about accepting yours. You are special and therefore he is flattered by your expressions of high regard for him. The wonderful give and take nourishes you both.

Here are the texts between me and Mark on March 20th, 2018. This was the day I found out about the affair. 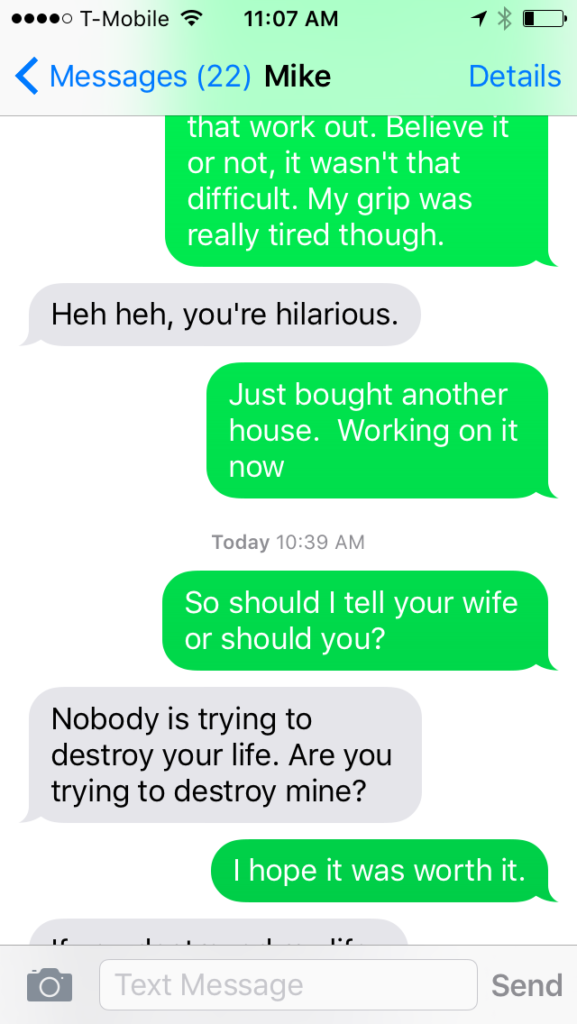 Here, the texting begins when I ask “So should I tell your wife or should you?” You see, I know Mark, so we have texted a few times before the affair was discovered.

No Mark, you are destroying your own life with your choices.  I don’t have anything to do with that. 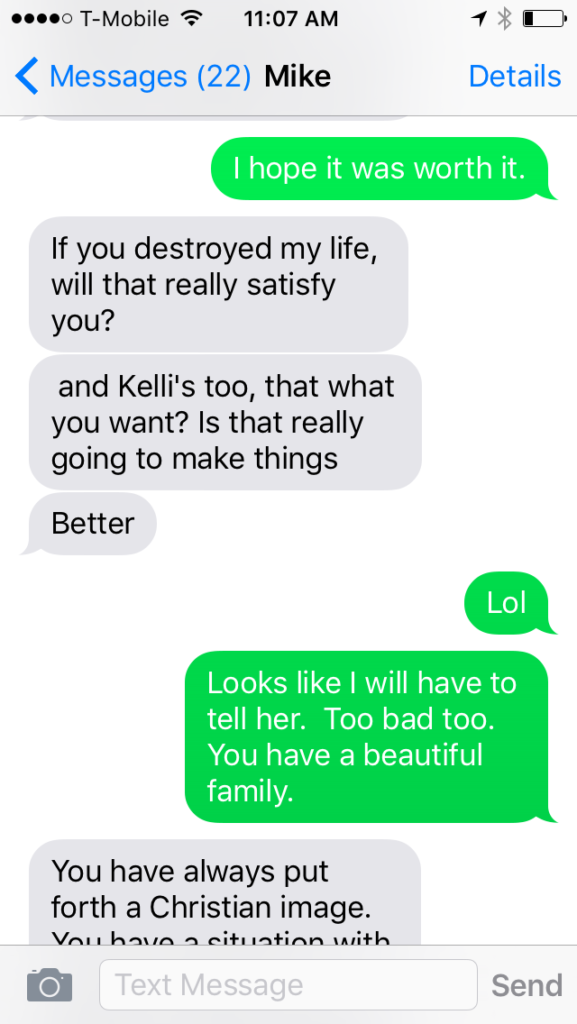 Here we see Mark’s desperate appeal to me.  “If you destroyed my life, will that really satisfy you? And Kelli’s too, that what you want? That going to make things better?”

Still fixated with his life being destroyed. Funny, he didn’t think about that the EXACT SAME FUCKING MORNING WHEN THE TWO OF THEM WERE TOGETHER. Sorry, where was I? 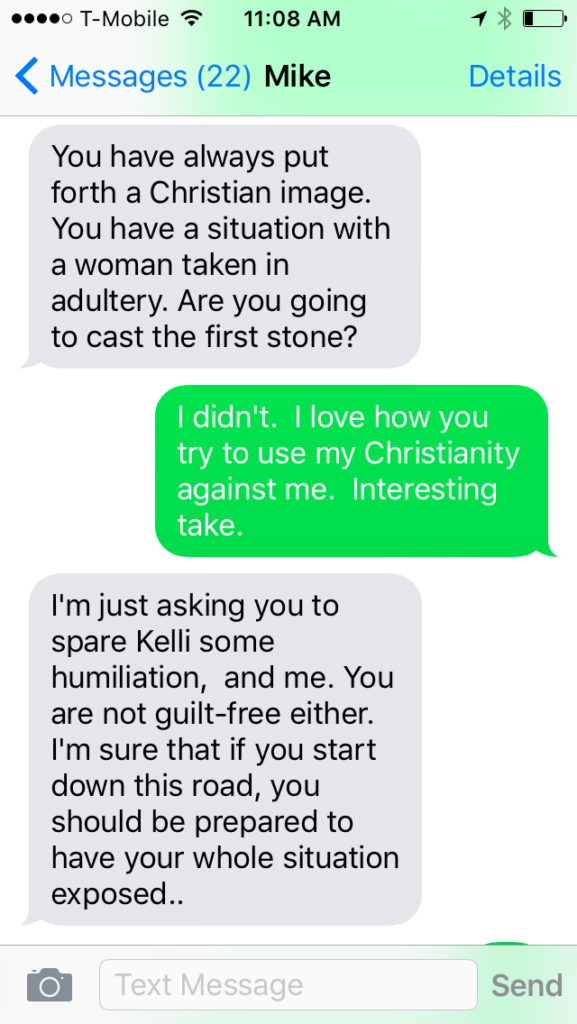 Now, the LDS Mark is gonna try to pull out my Christianity on me. “you have a woman taken in adultery. Are you gonna cast the first stone.”

Earth to egghead. You are in adultery too. You took my wife there.

“I am just asking you to spare Kelli some humiliation, and me. You are not guilt free either. I’m sure that if you start down this road, you should be prepared to have your whole situation exposed..”

This is one of my favorites. He wants to spare Kelli some humiliation (and him) of course.  Then he tells me that I am not guilt free. But last I checked, I wasn’t in the hotel or car with them while they were having sex. Then one more threat of “having your whole situation exposed”  I am not 100% certain of what that means, but I took it as a threat. 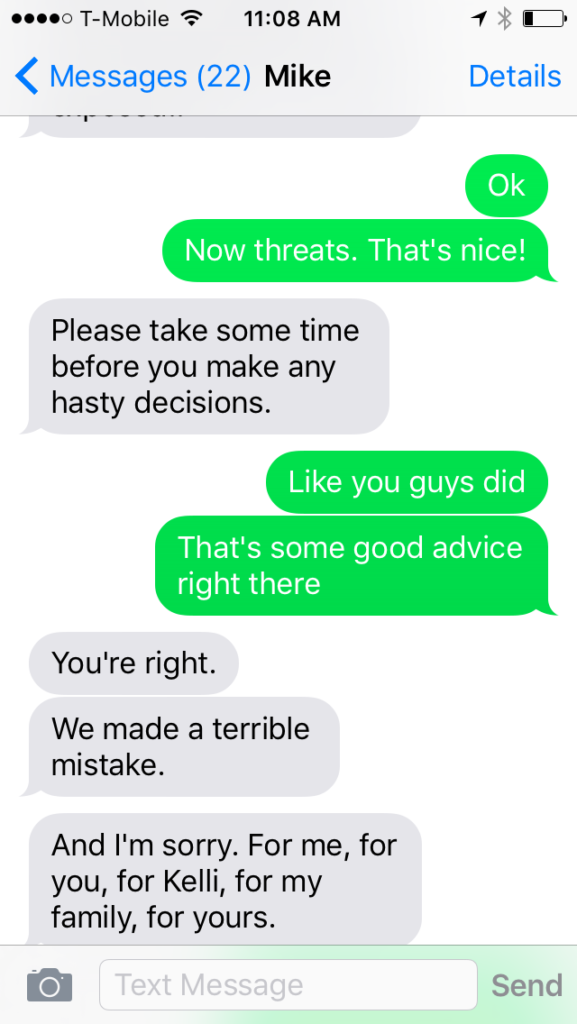 “Please take some time before you make a hasty decision.” he requests. You can see my reply.

Then some remorse.  It was fake, but it is an attempt by the narcissist to get out of the cage they’re caught in. 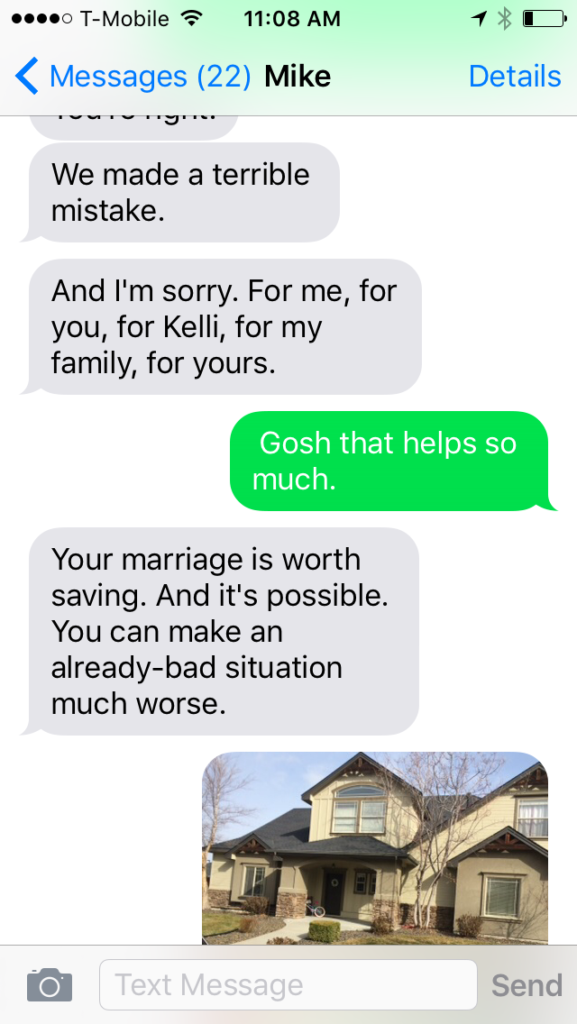 “Your marriage is worth saving. And it’s possible. You can make an already bad situation much worse”  While I am not sure how I can make a horrible situation worse, Mike’s desperation is bleeding through.

I love the marital advice he gives though. He should become a marriage counselor. 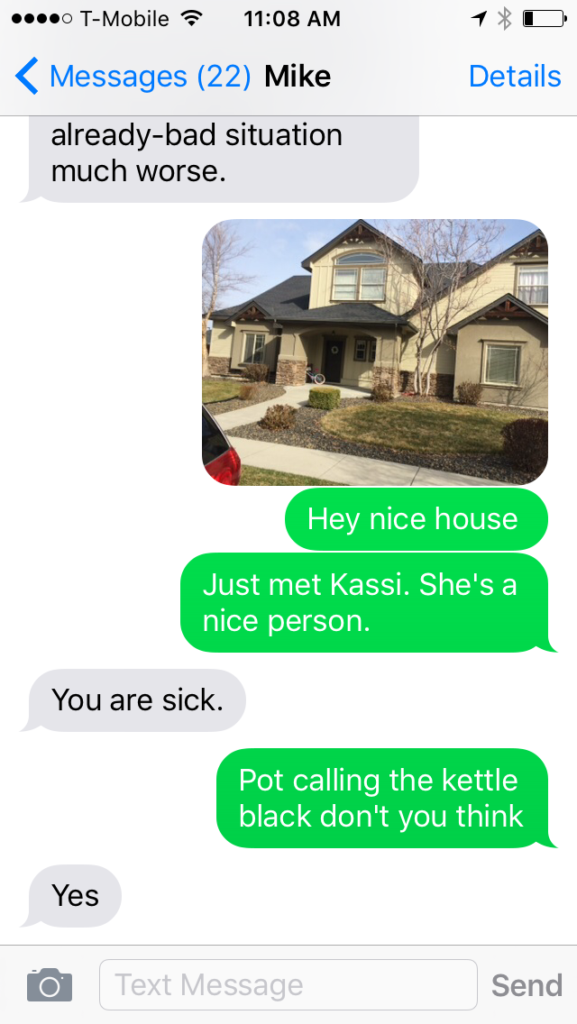 This is when I knocked on his door and met his second son. I asked his son if his mom Carrie was home. He said yes and went to get her. Carrie and I hung out on the front porch for a few minutes while I shared what I had just learned about 2.5 hours prior.

Carrie is divorcing Mark now. Guess he was right. His life is getting destroyed.  What he was wrong about is that I was the one destroying it. He himself destroyed his own life. I had little to do with it.

I think that Allie still believes that it meant something. That it was real, in a fantasy sort of way. That he had feelings for her. Because he said that. He said that he was “developing feelings” for her. Why did he say it? Because she was telling him that she loved him and he needed to mirror back to her to make sure he wouldn’t lose his narcissistic supply…his cash cow.